Samantha is leaving DPP to join Downtown Mesa Association as deputy director, where she will deploy her vast knowledge in business improvement districts and placemaking to help grow that emerging East Valley central business district.

The passionate downtown leader left her mark on Downtown Phoenix in numerous ways, including DPP’s signature street-level concierge program, the DTPHX Ambassadors. When DPP was formed in the early 90s, the Ambassadors were primarily security-focused. Jackson helped transition the team to the personality-forward, hospitality-driven program that is so integral to downtown today.

Erika Rubio, DPP’s Stakeholder Engagement Manager, says that she loved working with Samantha for her people-first approach when it came to helping businesses, putting up shade trees, and growing the Ambassador program to what it is today.

“There’s a very empathetic approach to everything that she does,” Rubio said. “What she has done here is beyond the actual programs that she has built, it’s the relationships and respect that she has gained from everybody she works with.”

In addition to running the Ambassador program for a decade, Samantha gained expertise in public safety, homelessness solutions, mobility, community engagement and event production (she helped grow Downtown Phoenix Zombie Walk from a 200-person event to a 20,000-attendee mega-event). As her role with DPP evolved into senior director of strategy and community affairs, Samantha was extremely charitable with her time and continued her pursuit of knowledge, serving on many local boards, including Community Food Connections, Central Arizona Shelter Services (CASS), Human Services Campus, Maricopa Continuum of Care and Arizona Guide Right. Samantha received her undergraduate degree from Michigan State University but will soon graduate with a master’s degree in public administration from Arizona State University. Spartan Devil? Sun Spartan? 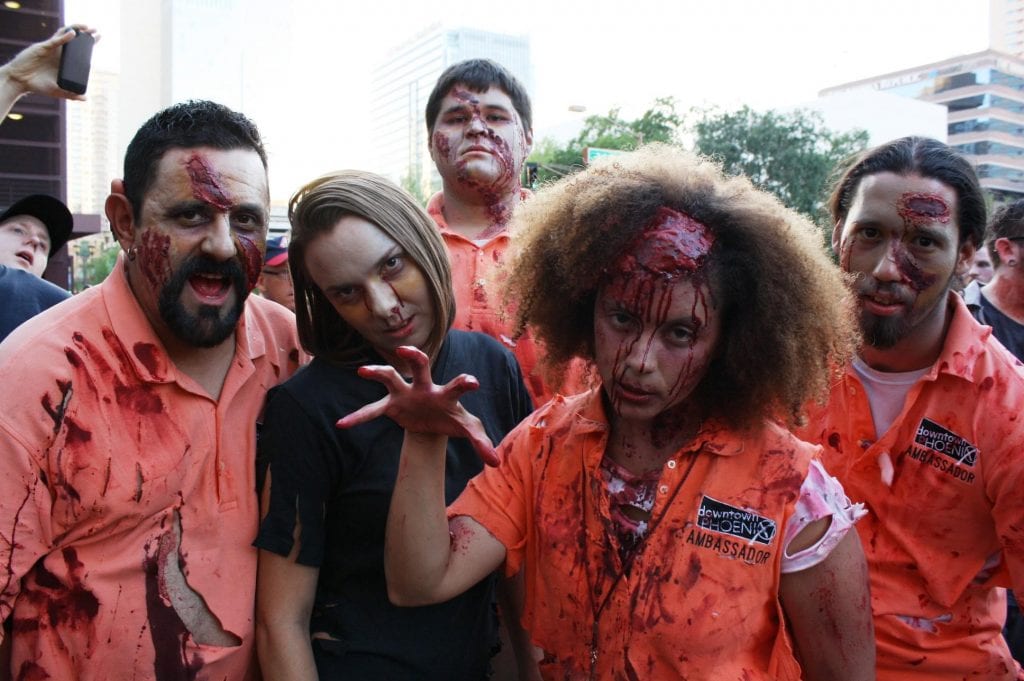 Downtown Phoenix Ambassador Chuck Padilla (far left) worked with Samantha Jackson for the past 14 years. According to Padilla, Jackson has grown the Ambassador program to a new level. She also taught him everything he knows about zombie makeup.

As she grew with DPP Samantha also raised her profile within the International Downtown Association, a global network of place managers. In 2016 Samantha was selected to be part of the first class of IDA’s Emerging Leaders Fellowship and was soon thereafter appointed to IDA’s board of directors.

“After seeing how other downtown’s ambassador programs are, I just think that what she’s done is amazing,” Banish said. “You can’t walk anywhere downtown without seeing a project that Sam has had some sort of hand in.”

Issues to do for 4th of July in Phoenix

Barry Bostwick Will Be in Phoenix This Weekend to Have a good time 45...